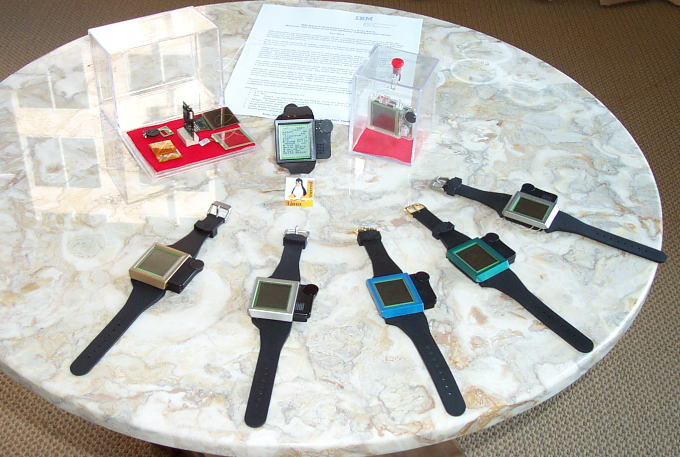 August 2000.  IBM researchers are successfully running Linux and X11 (a popular graphics library) on a device the size of a wrist watch, demonstrating the viability of the operating system across all platforms, from large enterprise servers, to medium-sized and small servers, workstations, desktop systems, laptops and now the smallest intelligent devices.

With Linux rapidly becoming an industry standard, it's important that developers be able to create new applications across all platforms, including pervasive devices, and the intent of IBM's research is to further that work.

Designed to communicate wirelessly with PCs, cell phones and other wireless-enabled devices, the watch will have the ability to view condensed email messages and directly receive pager-like messages. In addition, the watch will provide users with calendar, address book and to-do list functions. Future enhancements will include a high-resolution screen and applications that will allow the watch to be used as an access device for various Internet-based services such as up-to-the-minute information about weather, traffic conditions, the stock market, sports results and so on.

The watch contains a powerful processor along with eight megabytes of flash memory and another eight megabytes of dynamic random access memory. Users interact with the watch through a combination of a touch-sensitive screen and a roller wheel. The watch also has both IR and RF wireless connectivity.

Several benefits accrue from the use of Linux in small pervasive devices. The availability of source code and a well-understood application programming environment makes it easy for students, researchers, and software companies to add new features and develop applications.

Here is a video clip.

Linux is registered trademark of Linus Torvalds.   The Bluetooth trademarks are owned by Bluetooth SIG, Inc. U.S.A. and used by  IBM under license.