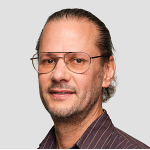 
Leo Gross, has been Research Staff Member at the IBM Research - Zurich Laboratory since 2009. He is the teamlead of the atom and molecule manipulation group. He and his team study on-surface reactions by scanning tunnelling microscopy (STM) and atomic force microscopy (AFM); they develop and apply the AFM as a tool for structure elucidation of individual molecules and investigate single-electron charging and transfer on the atomic scale.