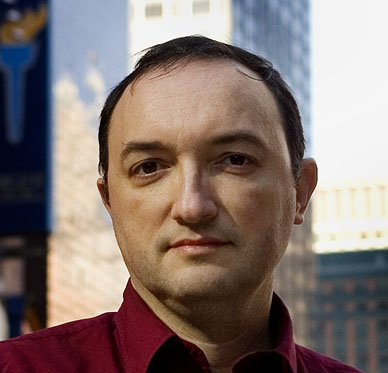 Claudio got his Ph.D. in 1999 from the MIT Media Laboratory where he conducted multidisciplinary research on computer vision, interactive spaces, temporal algebras, and interactive art and theater. In his works he created the precursors of many innovative camera-based interaction systems which were brought to the market 15 years later in devices such as the Kinect. He also created the first Internet blog in 1994.

After the Ph.D., Claudio was hired as a researcher at the T.J. Watson laboratory of IBM Research in New York where he worked from 1999 to 2008. There he invented the Everywhere Interactive Display, a revolutionary steerable projector-camera system which allowed on-demand interaction with any surface in an environment. This work was internationally recognized by a string of world-class publications, best paper awards, patents, and the 2003 Most Promising Scientist award from HENAAC (Hispanic Engineers National Achievement Awards Conference). In 2005 he started research in service science, a new scientific discipline focused on the service industries, and helped IBM lead the efforts to establish it internationally.

In 2008 he was sent by IBM to Brazil to study the feasibility of a new IBM laboratory in Brazil. After 2 years of intensive conversations with Brazilian government, academia, and industry, the IBM Research Brazil laboratory was founded in June of 2010. During this period, he also worked as a liaison between IBM Research and IBM Brazil, supporting science-based innovation projects in key IBM clients, and learning about the IT business in Brazil and in the world. Since the foundation of the laboratory Claudio has worked in all aspects of the research and innovation management, including business and scientific strategy, human resources hiring and management, funding and finances, grant proposals, government contracts and incentives, operations, intellectual property, business development, and university relations. He has also built one of the premier artificial intelligence and human-computer interface groups in Brazil and currently is leading the development of advanced conversational systems in Portuguese and English.

Claudio has more than 21 refereed journal papers and 121 articles and abstracts published in international conferences, including 3 best paper awards and 27 patents awarded in US, Japan, and Europe. His work has been cited 4300 times (h-index of 35 and i10-index of 78). He is a Senior Member of ACM, a member of the IBM Academy of Technology, and an associate editor of 4 scientific journals.

Earlier in his career Claudio was a faculty member of the department of Computer Science of the University of São Paulo from 1987 to 1990 and from 1992 to 1993. From 1990 to 1992 he lived in Japan with a Mombusho scholarship from the Japanese government. He was also a visiting researcher at the ATR-MIC Laboratory in Kyoto in 1996 and at the Sony Computer Science Laboratory in Tokyo in 1998.